Baby Boomers Are On Social More Than You Think

Baby boomers are people born between 1945 and 1964 and they are still the largest spenders in the economy. According to data we collected here at gen.video by surveying 1280 consumers, they are also very active on social media. It’s time to look at the data and see why if your social media and eCommerce strategy doesn’t include baby boomers, that’s a huge missed opportunity for growth.

While it’s not surprising that 90% of baby boomers use Facebook at least once a week, according to our data, 19% of baby boomers have made a purchase directly on Facebook. Those purchasing decisions are directly influenced by the content on social networks, and the frictionless path to purchase is making it easier than ever to convert without leaving the app. Though it’s less surprising to see millennials engaging in social shopping, we can't forget that older consumers are also engaging in these new buyer behaviors and ought to be catered to. 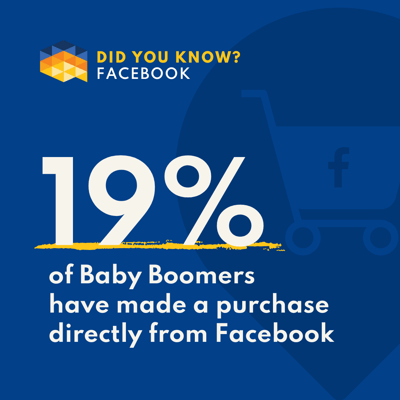 And they aren’t just on Facebook! Baby boomers are also highly engaged on YouTube, with 60% of those surveyed reporting using it regularly. Beyond just watching videos, YouTube is also a popular social shopping destination for boomers as well. Our data shows 22% of baby boomers use YouTube to discover and purchase products. While the percentage is much higher for younger demographics, it's expected that it will continue to grow over time for that age range. This means if you aren’t positioning and marketing your products to baby boomers on YouTube, you are missing out on a major market segment.

TikTok and Snapchat for Baby Boomers

Our data also shows that boomers aren’t just on Facebook and YouTube, they are engaging on all major social networks including Twitch and Reddit, albeit in smaller percentages. The survey we ran reported regular Tiktok and Snapchat usage among boomers came in at 11% and 7% respectively. While these numbers aren’t as impactful as the Facebook and YouTube ones were, they will likely continue to grow as the technology is adopted more and eCommerce and engagement features are further built out. This means now is the time to start strategizing about how to create specific content for older audience segments on newer social platforms in order to cater to their needs.

So while it’s definitely important to focus on the more popular social networks when targeting older consumers, brands that get ahead of the curve can reap the benefits of those who are quick to adapt to new technology. Think about the products and services that interest them and how you can join the conversations on social to help build brand awareness, adoption, and loyalty over time. And if your brand isn’t focusing on baby boomers and older market segments at all as part of your overall eCommerce and social selling strategy, now is the time to course-correct and align with where they are engaging, researching and shopping online.