Which Platforms are Best for an Influencer Marketing Campaign?


gen.video has always had a bias toward video which as of a few years ago meant that our top three platforms were YouTube, YouTube and YouTube. We were aware of the dominance of Instagram as the top platform for sponsored content, but just didn’t see comparable opportunities based on our focus on downfunnel traffic and sourcing video content that our clients could repurpose.


Today, it’s a spoil of riches with YouTube, TikTok and Instagram itself becoming much more video oriented. Here’s a good rule for anyone early in a career in media:

As we look to the future, the only question we have is whether livestreaming will ever take off here the way it has in Asia.

To get started, let’s size these platforms up a bit. Although there aren’t any publicly available estimates of sponsored influencer marketing spend by platform, we can use some other numbers to get a sense of scale. Influencer Marketing Hub estimates the total influencer marketing industry at $16bil worldwide, so it’s only a fraction of the $75bil or so in global ad sales that these platforms alone are generating (which may explain why they aren’t more aggressive about collecting tariffs on sponsorships). 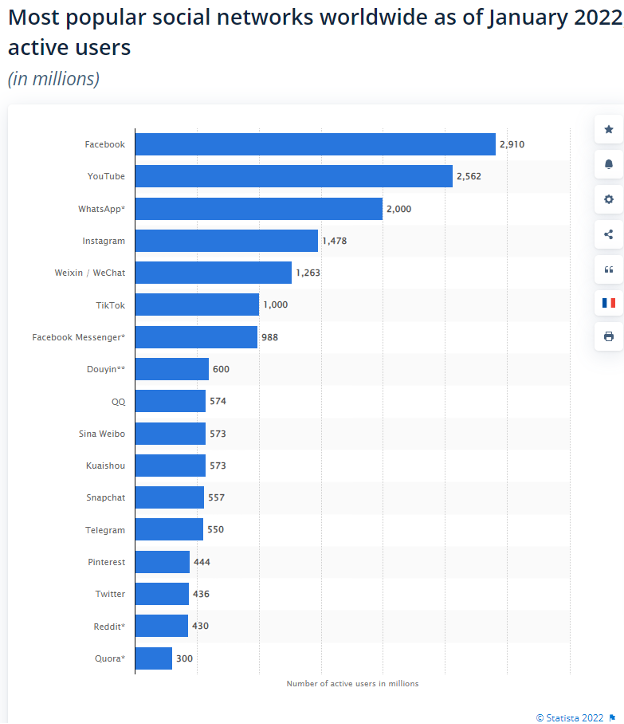 TikTok’s $4.6 bil may seem small by comparison, but while the others are growing no more than 40% (which is very fast by any normal standard), TikTok is projected to grow by 3x in 2022 to $11 bil (souce: Reuters, citing Insider Intelligence). Is TikTok a flash in the pan? Not likely. Scott Galloway has just reported that TikTok’s monthly time spent per user exceeds Facebook and Instagram combined:

Transparently, while we support them technically, we’ve never seen much opportunity on Snapchat or Pinterest. And while we like Twitch, they typically present more niche opportunities. Twitter, for us, has always been about supporting primary posts. We’re also pretty fascinated by LinkedIn given more and more B2B orientation in our clients but not enough experience to speak from a place of expertise. If anyone has great experience on these platforms, feel free to do self-promotion in the comments.

All right, with the sizing done, let’s dive into the platforms and talk more about them from a bit more of a “microeconomic” perspective.

Instagram:
Commonly recognized as the largest platform for sponsored content, historically Instagram was image-based. Today, not just Stories and Reels, but even video within feed Posts has made it a home for both image and video content. That alone makes it a reasonably unique platform as YouTube and TikTok are video only.

As popular as Instagram is, we believe it was historically cheaper than YouTube at least on a reach basis. This made sense on a few levels:

There are some verticals that are ideal for Instagram, primarily fashion. The ability to show clothing in a still image or short vertical video is arguably all you need to close a sale (which isn’t to say there isn’t great fashion stuff happening on TikTok). Cost efficiency matched with ‘conversion sufficiency’ is a potent blend made even more impactful by the prevalence of direct to consumer (DTC) brands in the fashion vertical where measurement is more direct and straightforward than with a multichannel brand.

In other verticals where more demonstration and information is required to really inspire purchase, Instagram has some deficiencies even where video is in full use:

Obviously, if you are looking for repurposable images or vertical video, you aren’t going to be able to take a YouTube video and directly repurpose it. That said, while you typically aren’t getting great long form video from an Instagram-first influencer, we’ve been able to source great lifestyle images and even vertical video from YouTube influencers.

All of this is what made YouTube our favorite platform even before most marketers got there. So it’s especially gratifying to see this quote in HypeAuditor’s 2022 US State of Influencer Marketing Report:

What’s not to like? The primary detraction on YouTube currently is the variability of the algorithm which can result in some videos getting multiplicatively lower views than others. YouTube has long been known for punishing influencers who strayed outside their area of expertise, it now seems like they might be punishing influencers who have too many sponsorships. Or, they are losing viewers to TikTok and randomly spreading the pain from that dip around the pool as we are seeing not only a flattening of views in many cases but some videos simply flatline right out of the gate and never gain traction. That’s a tough thing to explain to a sponsor.

TikTok:
TikTok is the new kid on the block and is capturing not only a lot of viewer activity, but also the brand attention that always follows user adoption. That said, there’s maybe just the slightest hint of hesitation on some brands’ part. Is it that they aren’t sure the content is quite right? Data privacy concerns? Unclear, but the net result is that there’s a bit of a “we try harder” attitude both from TikTokers working with brands and from TikTok itself.

I have to admit, I was skeptical at first myself: nurses twerking to Beyonce didn’t seem like it had much chance of becoming a serious competitor to YouTube. That said, TikTok has evolved very quickly and everyone is familiar with stories of products that sold out online and offline after trending on TikTok (#TikTokmademebuyit).

And that is a great place to start. TikTok says that its algorithm works on an interest graph vs. a social graph. So sure, you can follow people but the videos that the “FYP” (for you page) serves up are based on your interests over the people you follow. So if you start watching videos about a specific product, there’s a strong likelihood that it is going to seem like everyone has made videos about that product. The Wall Street Journal and others have called it the ‘TikTok rabbit hole’ and even highlighted the negative behavioral consequences for teens and others (the WSJ and others have also taken Instagram to task for its addictive algorithm. All great topics but beyond the scope of what we’re about).

And even beyond this “best of all worlds” there are currently some very human TikTok advantages that we like:

It’s awesome to be able to match a client’s priorities and KPIs by leveraging different platforms, let alone across the thousands of influencers across those platforms. And that’s where we will turn next week: to the differences between small influencers (nanos and micros) and larger influencers (macros).